The Colour Duo is the ultimate tool for adding analog color to your tracks. Each of the Duo's two channels is a full channel strip, with mic preamps, line inputs, and three Colour slots each.

You can purchase the Colour Duo kit on its own or with one of our Colour Bundles. The bundles contain stereo pairs of each Colour, so six Colours each. To learn more about each bundle, check out our Colour Format Page.

With the Duo we set out to make the Colour Palette of our dreams. Each channel features three Colour slots, with their own independent controls and bypass switches.

New to the Colour section is the much-requested wet/dry mix control. The MIX knob allows for versatile parallel signal processing without making extra tracks in your project file. Push your Colour modules as hard as you’d like, and blend in the dry signal till you get exactly the sound you’re searching for.

The Colour Duo is the first Colour Palette that lets you swap Colours on the fly without any tools. Simply loosen the thumb screws on the front panel and the entire panel slides out, giving you immediate access to the Colours at any time.

The Colour Duo features the same pristine mic preamps that made the CP5 our best-selling kit. With exceptionally low noise and 66dB of gain, this isn’t your interface’s built in preamp. Once you hear them at work, you won’t hesitate to record your most important sources with them.

The Colour Duo’s line input is an independent stage that bypasses the preamp completely. And since the line and mic inputs come in on separate jacks, you can keep both connected and just switch between them with the LINE/MIC button on the front panel.

We gave you all the connectivity we could think of. Why? Because we like you and we hate adapters as much as you do. We even equipped a power THRU jack so you can power multiple Colour Duo units from one supply.

Track your two most important sources or a stereo pair with the Duo's two world-class preamps. You can track clean to process later, or engage Colours for processing on the way in.

Use the two channels as line inserts to bring real hardware color to your tracks. Warm up a vocal with saturation or push a room mic to the extreme with a compressor.

Add punch to a stereo drum bus or glue your entire mix together with tape and transformer saturation. "So, do I like it? Hell yes, I like it! As I mentioned, I’m a long-time fan of DIYRE’s work and use their CP5 and EQP5 (preamps and EQs, respectively) all the time. I love the Colour Duo preamps for the same things I love the CP5 for: overheads that have all the depth and pinpoint definition of a beautiful drum kit, acoustic guitars that sound like they are right in front of the listener, and strings that need to shimmer through a mix. Combine these gorgeous sounding preamps with the options available in the Colour modules, and you can create almost any flavor of preamps you want. Not to mention, you’ll have a new processor for mix bus or track insert duties allowing you to add transformers, compressors, or EQ curves – the Colour world is deep and constantly evolving!"

Audio enters the Duo through either the MIC IN or LINE IN. The MIC IN can amplify the mic signal up to 60dB, while the LINE IN has a fixed attenuation of -6dB. The MIC/LINE switch selects which input is sent to the rest of the unit.

Signal is then sent to the Colours in series. Each Colour contains a bypass switch, and a dual-gang potentiometer which controls gain before the Colour and attenuation after. The Colours feed a gain/trim stage to make up for the gain or loss from the Colours. This signal then feeds the wet/dry mix stage, where it is summed with the dry signal from before the Colour section. The COLOUR switch selects between the output from the mix stage or the output from the MIC/LINE switch. This feeds the balanced output which provides +6dB gain. I have 4 colours of all the options and I can only say wow, it's the perfect toolbox to have a lot of options in a small space and not only that, being able to combine those colours makes it even more magical!

i love this product! 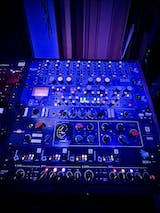 J
J.M.
I gotta give another review

After a few years of using this thing, I must say it is indispensable in my studio. I have mic preamps from Crane Song, Great River, A Designs, and Avalon, all of which are fantastic and do great things, but none of them do what the Colour Duo does. I have the 15ips, Toneloc, and some other module and this thing is so versatile. I recorded Acoustic Gtr, Mandolin, and banjo this week with the Colour Duo and a Royer R122. Everyone was blown away! Probably adding another one soon.

I've had a few months to put this thing through its paces. I'm glad I made this purchase. I had some pretty high hopes for this product- and the Duo, along with the team at DIYRE exceeded my expectations. This is a very involved build, so if you haven't brushed up on your soldering chops like me, I'd recommend assistance or a pre-build. I made a SB2 and RM5 a while back and hadn't soldered anything in a while... Make sure you are using high quality tools and solder- as well as a good pump because there is a LOT of room for human error. In one of my fudges- I accidentally lifted a pad and had to send this out for repair. It was worth the hassle and wait though and this thing has really been a game changer for me.

One of my TM79 modules was missing some parts- but DIYRE sent the stuff out immediately after I sent them an email- no questions asked.

I got this product to add flexible preamps, but mostly to make my first jump into OTB mixing and get that depth and weight and sonic smear I felt I was lacking mixing ITB. I often use amp sims Kemper/Tonehub/Neural and also feel like I struggle to get the weight/movement from a real rig. I wasn't sure what to expect- but the 70s character pretty much addressed all of those problems. The Duo sits on my Master Bus and gives me the saturation and glue I was looking for- and now I'm wanting more Colours. I am currently running the Duo as DOA->TM79->15IPS all around 1 o'clock. My mixes are glued, larger, deeper, louder, saturated, and more cohesive.

The best way for me to describe the DOA with RED-25 is that it sort of "inflates" the sound and adds more punch/depth to transient material. The TM79 does a similar thing, but with the transformers- it sort of holds things in place in the midrange, with added punch, but softened ITB "pokey-ness". Those 2 things get the vibe for an API-ish sound, similar to driving my old API A2D 3:1 transformer mode. The TM79 does a cool thing for holding a vocal in place- I definitely think it will be a part of my vocal chain moving forward. The 15IPS is the one that surprised me the most. This colour had the most dramatic effect on my Master Bus out of the 3 modules. It shifts everything in a cool way to give everything width and depth- while shaving off the peaks from things like the snare drum. It levels everything out to a more consistent dynamic range (and I mean by a LOT) and just adds the glue I was looking for- I would say the 15IPS is my favorite colour so far. I will likely buy another pair of 15IPS, and see if I can modify components to have less of a low end bump.

The preamps are clean in a non-sterile way with tons of gain on tap. Noise floor was only apparent after being dimed with my SM7b. I have mostly Audient pres for utility duty to compare- I think the Duo pre performs favorably. Different shades of white I suppose- the Duo being much more easy on the eyes. Will hold its own against my higher end pres for sure.

I did notice there were a fair amount of non-linearities- things lose a super-defined phantom center when 15IPS is engaged. However, when disengaged- the whole mix sounds flat/papery and transients are poking out way too much. Overall, the Duo definitely is a killer swiss army knife product. Weighs a ton, solid construction, sounds great, and has a great company behind it all. Will be purchasing more from DIYRE. I will see if I can do some videos demonstrating all this in the near future- there isn't enough hype behind the Colour format. Thanks for everything!

J
John Cheadle
I can't believe I waited this long to get it !

I have compared this to the Heritage Audio HA-73 that I use for a Mic pre and the Colour duo is smooth and very detailed. I had to match it with a digital EQ to get it sounding more present but when you do that on the HA-73 its sounds harsh in comparision. I have all the colors on at various levels to try and match the HA-73. At the end of the day this Colour duo sounds crazy good and is exactly what I was looking for. I like to print through hardware saturation and this sounds better than my Neve 542's.

The ability to customize the colors and the way they impart sonically is fantastic!! Oh!! Its also quieter than any gear i’ve ever had -102db