The punchy, forward sound of a vintage American console.

Transformers and discrete opamps (DOAs) are the core building blocks of the American console sound. The punchy, present sound of those classic 70's consoles derives from the unique character of the DOA and transformer and the complex ways they interact with each other. Countless plugins have tried to imitate this sound, but why imitate when you can have the real thing?

The CTX combines the RED-25 DOA with a Cinemag transformer and then cranks the gain to pack the sound of a channel strip into a single Colour. At moderate operating levels, the module's effect is vanishingly subtle, but makes everything sound more "finished" when stacked over numerous tracks in a mix. As levels increase the transistors of the DOA and core of the transformer saturate, thickening the signal with low-frequency harmonics and natural compression.

In 2019 to celebrate the fifth anniversary of the Colour Format, we redesigned the first three Colours, the 15IPS, CTX, and JFT, to use only discrete, class-A transistor circuitry. You could think of this as the opposite of an update—we’ve revered the technology of the Colours back to the late 60’s. The result is an authentic vintage character that’s more nuanced and refined.

In the process of revamping the CTX, we realized that incorporating a 2520-style DOA would be a natural choice given the history of API and Cinemag. Thus the CTX went from being a simple transformer Colour to a more full-featured American console Colour.

The DOA adds another layer of saturation that complements that of the transformer. The overall effect is more pronounced than the mkI, with higher harmonic distortion at low levels and the ability to impart noticeable compression effects at high levels. "CTX may be my favorite of the bunch. As you push the input level, it substantially 'thickens' just about any source. A stereo pair across a drum bus can dramatically change the character of the drums without sounding heavy-handed."

This thing was easy to build and sounds great!

I definitely recommend this color card for your setup. the RED-25 is a pretty close rendering of the 2520. I actually have a 2520 and i feel that the RED 25 just might have a little more thickness to it. Great way to get your feet wet!

Let me first say Peterson did me a solid by replacing an order that didn't arrive, no questions asked. A+ on that

This CTX kit is fabulous. I have a few CAPI preamps and this definitely holds its own, with a slightly different character. Transformers are an underrated part of the vintage recording "warmth" that so many of us attribute to tubes and tape. This colour unit can bring that to your recordings very nicely. It retains the high end, but adds a bit of heft and bigness to a sound. It's subtle for sure but you will want to leave it on.

I'm a big fan of the API sound so naturally I wanted to build a piece of gear that emulates it. High quality components, great build guide, and it sounds amazing on just about everything I put through it in my CP5. 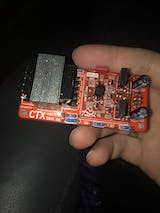